This weekend, Devin, Amber, Erin, Raquel and I decided to see some things in Oregon we had never seen before, one of them being this creepy Masonic cave near Crane, Oregon.

This cave is owned by the Masonic Lodge of Burns, and is located about 17 miles east of Crystal Crane Hot Springs, which is where we stayed on our trip. The hostess that checked us into our RV showed us some photos they had hung in their common room of places to check out in the area.

We told her we were already planning on checking out the Malheur Cave, and she told us to be sure to dress warm and to bring flashlights, and to make sure we had extra batteries. She said with no light inside the cave, you can’t see your hand in front of your face.

She also said the best time to visit the cave was at sunset, so after a yummy dinner at the Crane Cafe, we made our way to the cave.

We got there right as the sun was setting, so the entrance of the cave was already dark. According to the www.burnslodge.org website, this cave is a classic example of a lava tube, and is about 3,000 feet long. The entrance of the cave is about eight feet high, and opens up to about 20 feet high toward the end. Also at the end of the cave visitors are greeted by an underground lake. I’ve seen photos online of people canoeing or paddle boarding in the lake. I am not sure how far back it goes, but we decided next time we needed to bring a boat of some sort.

Also according to the www.burnslodge.org  website, this cave has served as a meeting place for the Masons in this area since 1938, when two members of the lodge, Ulysses S. Hackney and Charles W. Loggan, came up with the idea of holding an outdoor stated meeting in the Malheur Cave 52 miles east of Burns. They devised a plan to use the Malheur Cave for an outdoor meeting of Masons in Oregon. Their idea was well received, and the first official outdoor meeting of Masons in the Western United States was held at the Malheur Cave at a stated meeting, under Special Dispensation, at 8:00 pm, October 1st, 1938.

When we were deep inside the cave, we decided to turn our flashlights off, just to see how dark it was. The camp hostess was right, you couldn’t see your hand in front of your face, and the darkness quickly became suffocating. Glad we had 7 flashlights, two headlights, a string of lights, and extra batteries. 🙂 This was a super fun excursion I would recommend to anyone….if you dare. 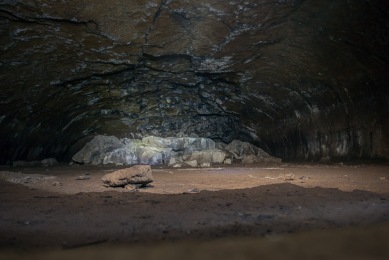 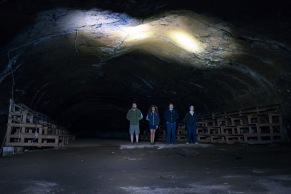 2 thoughts on “The Malhuer Cave”