I’m officially obsessed with Benton Hot Springs. Devin and I first discovered this place on accident a couple of years ago. It was dark when we drove through Benton on our way to Tonopah, but the old mercantile there caught my eye. After trying to take photos of it in the dark, and even having Devin shine his headlights on it to try and get a shot, I told him that we had to come back here and check it out. So this trip we did, and it was incredible.

There are rooms at the inn as well as a cabin at Benton Hot Springs, but I absolutely recommend camping here if you get the chance. Each campsite has it’s own unique tub, and they are all so pretty! We stayed in campsite #6 which was surrounded by short trees that offered some more privacy, and kept our tent out of the wind. We absolutely loved it.

After a good nights sleep in our tent, Devin and I woke before sunrise eager to get in our hot spring tub. When we called to book our campsite, they were full all the other nights, so we wanted to take advantage of having our own tub for as long as possible.

When it started to get too warm to sit in the water any longer, we started packing our stuff up to move to the cabin we would be staying in that night, and took advantage of exploring the small town of Benton. 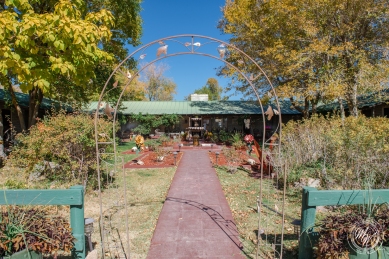 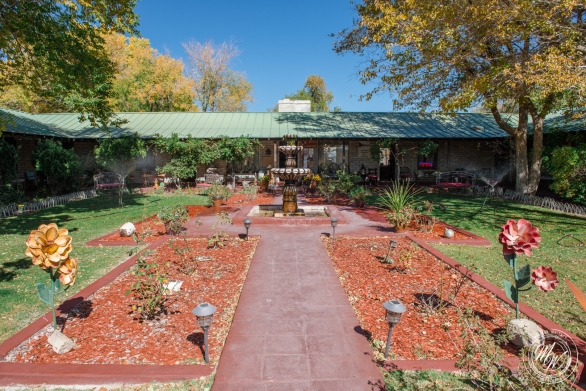 Benton Hot Springs got its start around 1863 when silver was discovered in the Blind Springs Hills along the White Mountains.

Benton is one of the oldest surviving towns in Mono County, and was once a thriving community, with up to 5,000 inhabitants.

Today you can see several of the original buildings. While the town is much smaller these days, it is a community that still thrives in ranching and farming, and while we were there learned that Benton Hot Springs is a popular place to vacation and draws people from all around the country.

Devin and I were frequent visitors to the Benton Station, which serves the tiny town as it’s grocery, gas station and restaurant. 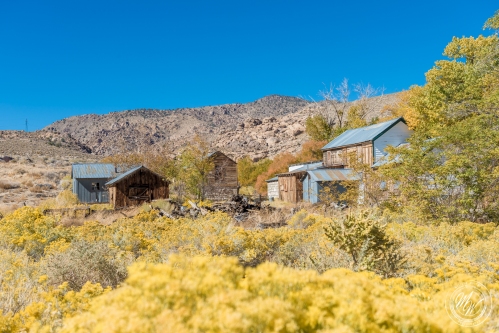 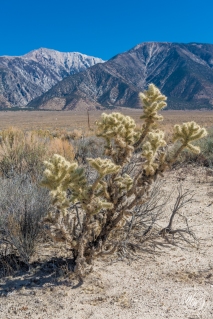 Just across the road from Benton Hot Springs is a large field with maybe 40 – 50 mules. A few of them were curious enough to come up to the fence, and they were so cute! The big all brown boy just wanted loves and pets, and we happily obliged. I think he liked having his picture taken. If I had my camera just hanging  around my neck, he would try to nuzzle it, like he wanted more, haha. He was a handsome fella! 🙂 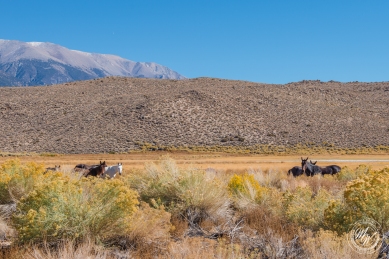 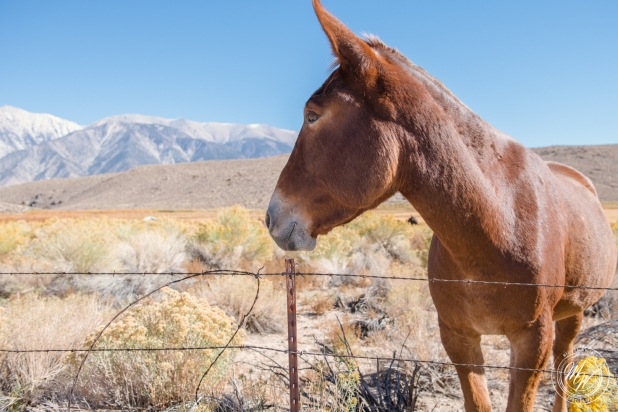 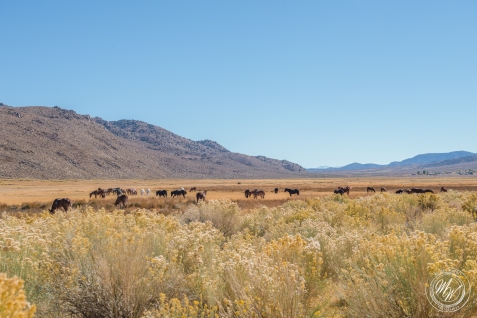 This is called the Miner’s Cabin, which is where we spent our second night at Benton Hot Springs. The nice thing about staying at the cabin or the inn, is you have access to showers, AND they feed you breakfast in the morning.

The yard area that surrounds Benton Hot Springs is really neat. There are three tubs next to the inn for those that are not camping to share. 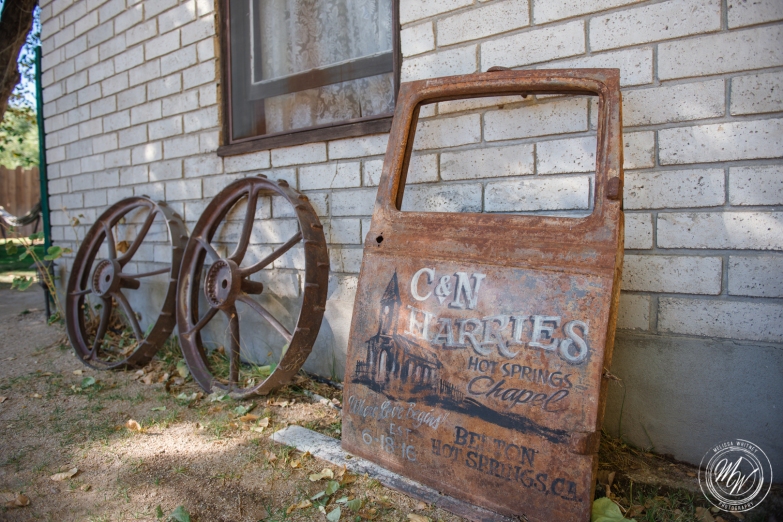 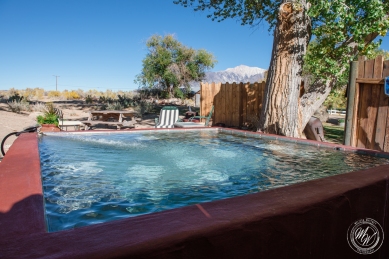 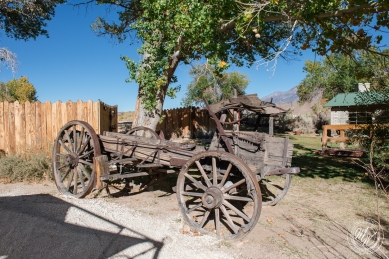 There were lots of neat old buildings, including this random dome shaped one. And a LOT of old cars! I’m a sucker for vintage trailers and cars, and Benton has no shortage of them. 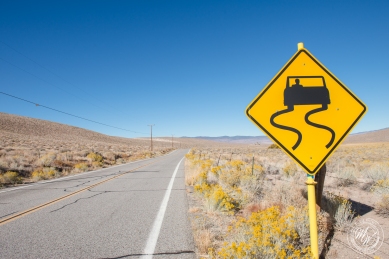 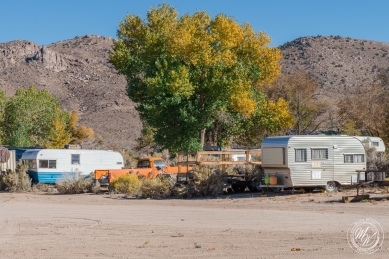 Here are more photos of the beautiful grounds around Benton Hot Springs. The inn does have WiFi, but there is no cell service in Benton, which was actually kind of nice. It is so peaceful and relaxing. 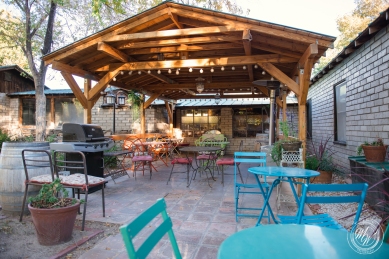 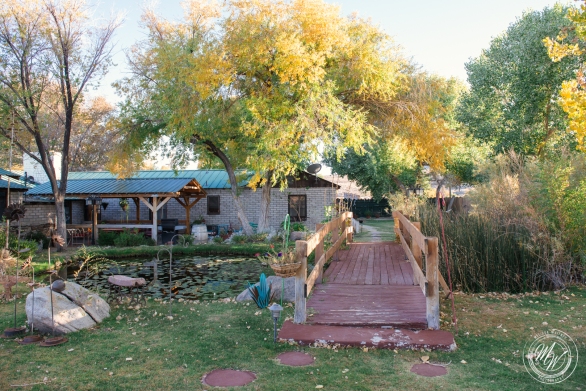 As I mentioned, Benton has no shortage of vintage vehicles. They are so neat! 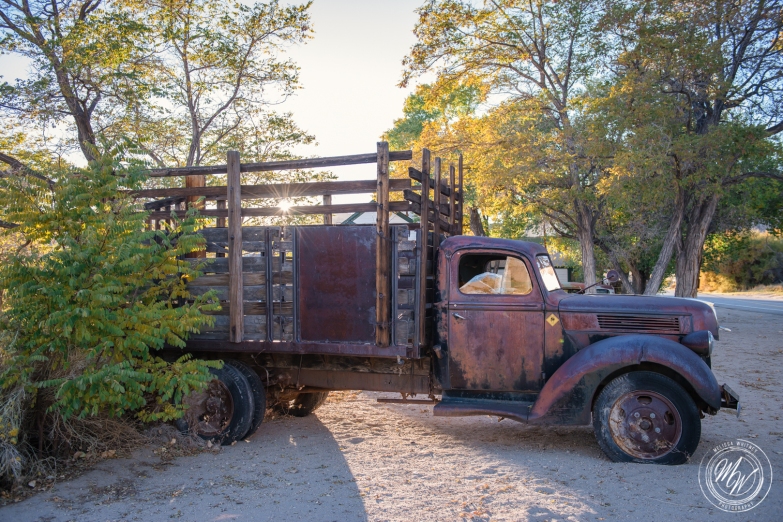 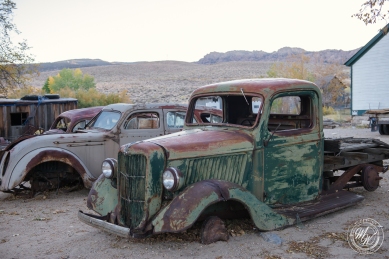 This is the mercantile that caught my eye when Devin and I first drove through Benton in the dark. It sure is a neat old building. The man that took my reservation for the hot springs said his grandfather is the one who opened that store. I wish it was still open. 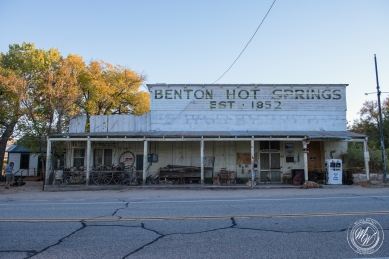 Below is the entrance to Benton Hot Springs where you are also greeted by historic art decor such as wagons, and original recliner.  🙂 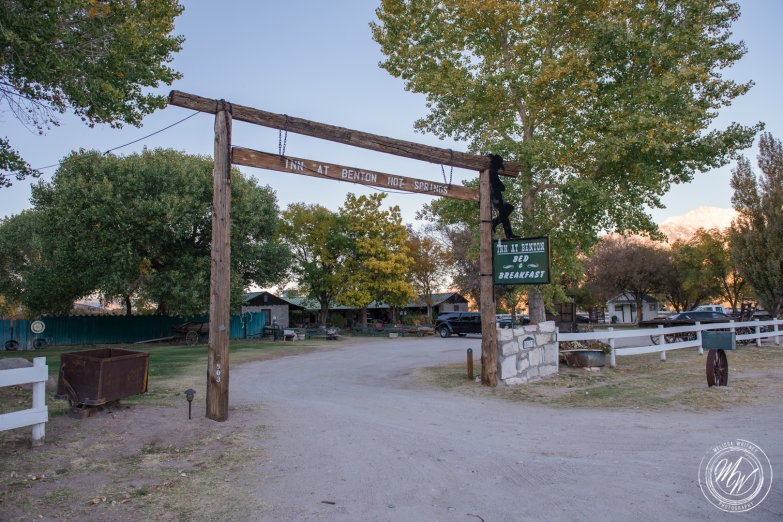 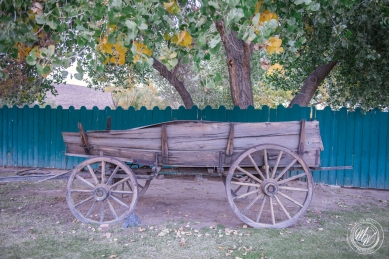 After wondering around the town for awhile, we went back toward the inn to check out their gift shop. Inside the gift shop they had a list of things in and near Benton you could go check out, and one of those things was the Benton Cemetery, that is literally right up the hill from where we were camping. On the way up to the cemetery we passed by this neat old cabin.

I love a good old cemetery, and this one did not disappoint, with an array dilapidated fences and unique headstones, dating back to 1868. We got to the cemetery right at dusk, adding to the eeriness. We saw a large tomb with a skull and crossbones on it, which I have never seen before. 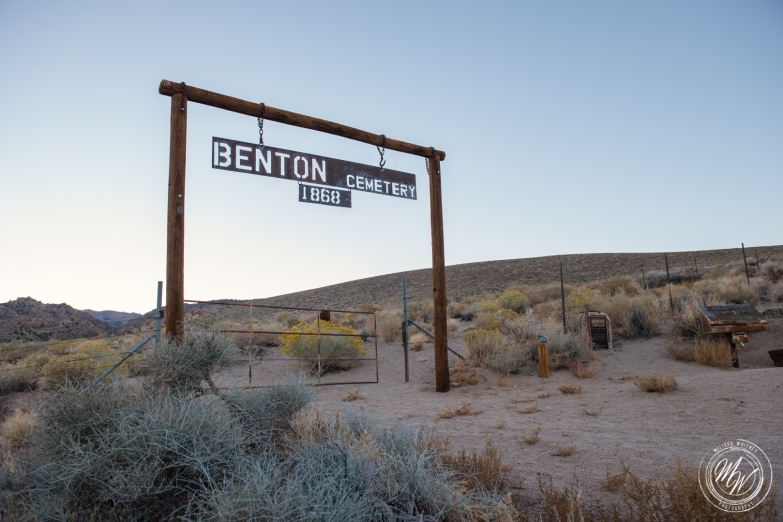 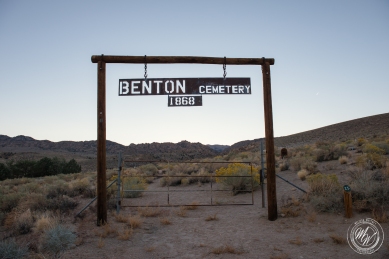 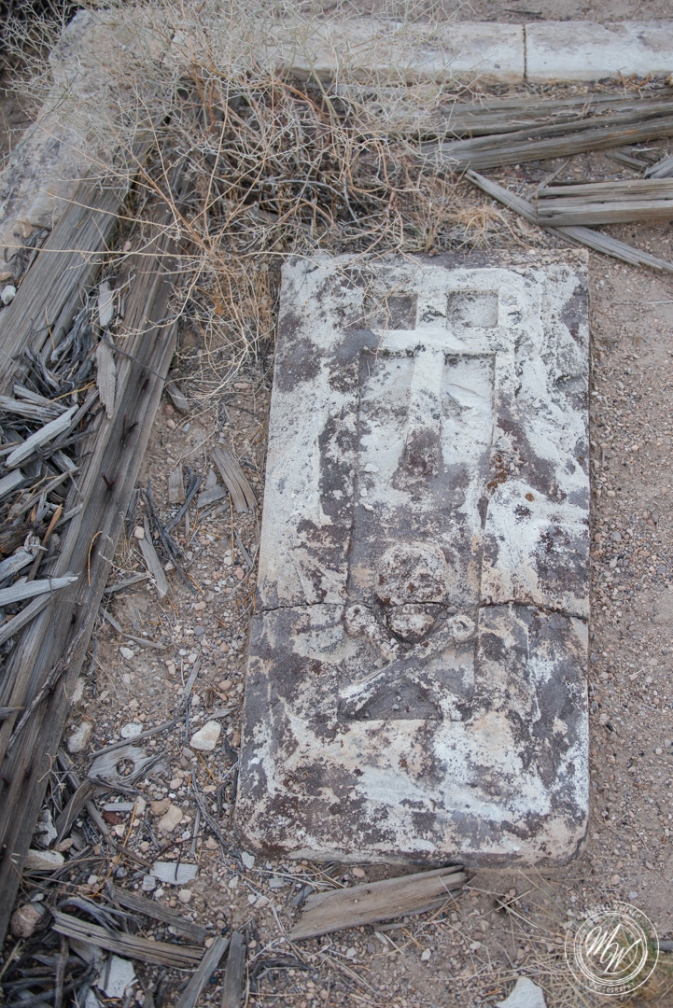 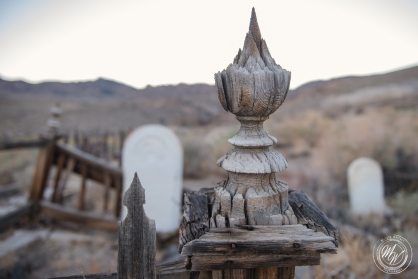 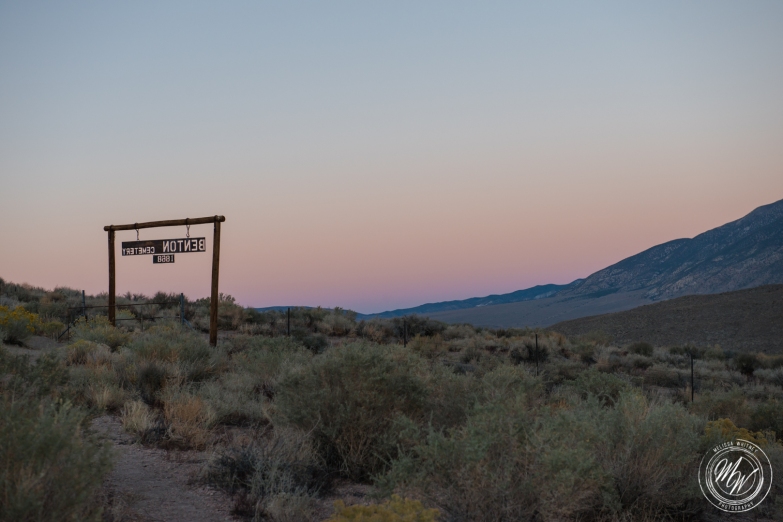 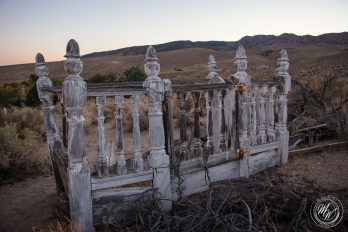 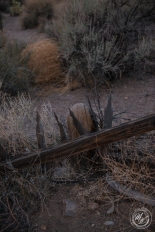 The next morning, Devin and I had breakfast with a man who is a movie producer and film editor in Los Angeles. We had a great time talking with him. He thought it was super cool that Devin and I were doing a brother/sister road trip, and said he was inspired to give his sister a call to see if she would be up for doing a trip together.

We had such a great time here, and can’t wait to go back!